It’s been a busy few months for me, I haven’t had a whole lot of time to write blog posts as I finished my first semester at RPI, had an action-packed winter break, and completed my first year at RPI. So here’s one really long post about everything I would have posted individually had I the time.

I had two final projects due at the end of last semester that were games. One was for Intro to Game Design, where I chose to focus on the mechanics and technical aspects of the game, the other was for Art for Interactive Media, where we had to focus on the aesthetics, specifically pixel art. The source code for both are available on GitHub, as igd-final and afim-final, respectively. I spent a disproportionate amount of time on these projects, completing the Art for Interactive Media project in a matter of hours but spending several days on the Intro to Game Design one. 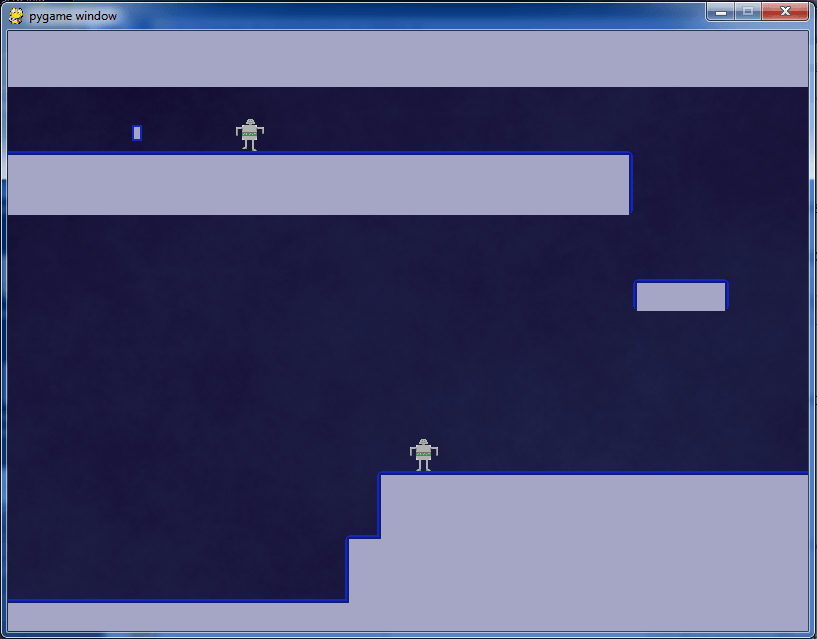 My Intro to Game Design project was a puzzle game with the primary mechanic of failed attempts acting as agents in the current attempt. The game stores all your keypresses (compressed by number of frames held in a run-length encoding fashion) in a lifetime and stores them. When you die, it copies them to a list of previous lives. Every frame the list of lives is iterated over and and the keypresses are applied to a separate Player instance. The previous life Players interact with the world as the current Player would, meaning that changing the state of the puzzle may result in previous lives dying early or being stuck where they wouldn’t have been earlier. The idea of the game is to force the player to die multiple times in order to be able to complete the level. Making the previous lives interact with the world as it is in the current life gives the game an interesting challenge where you have to worry not only about getting your current life to where it needs to go but also to make sure that you don’t mess up the previous lives and get yourself stuck.

I only had time to make 2 very simple levels, but still found it difficult to design levels that were difficult without being diabolical or relying on perfect timing. The goal of the project was to make a game based off one of two (or both) randomly selected words, of which mine were Failure and Propagate. I felt like I succeeded in that goal, as my game requires failure to succeed, and that your failed attempts propagated through the time that you spend solving the puzzle. 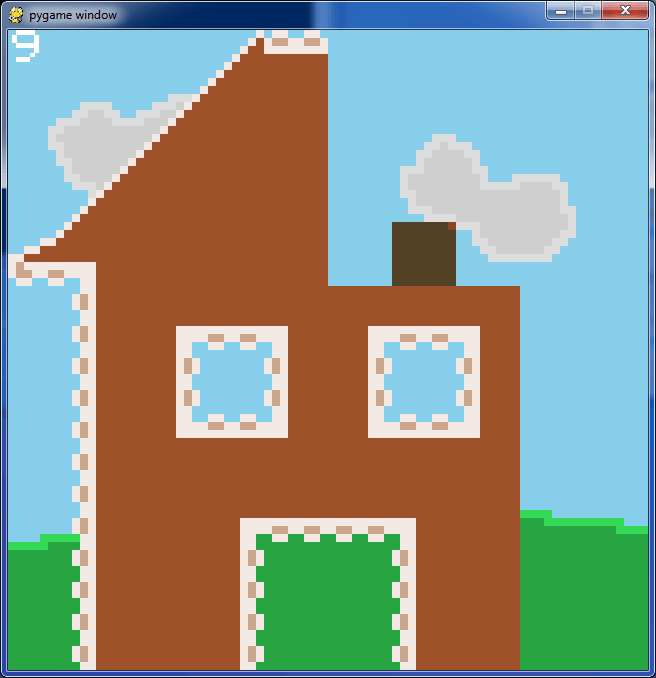 My Art for Interactive Media project was a much smaller project in which I attempted to do pixel art. The game is very simple and was made in only a few hours. The point of it is to build a gingerbread house by clicking on tiles in under 30 seconds. You get a score based on how similar your gingerbread house is to a reference one stored in a file. This game could have used a lot of additional work, the most important bit being what happens when you click on an incorrect tile. I should have some logic to push the boundaries of the house further away instead of just making a floating gingerbread block there. I doubt I’ll really have much time to go back and add anything or fix any of the flaws, as there will always be something more important to work on, but you never know, maybe I’ll use it as a way to transition back to Python and pygame in the future or something. I’m not that great at pixel art and I’m fine with that, I’m mostly interested in 3d graphics anyways. If anything, I’d work on generating 3d gingerbread houses or something really cool like that.

Throughout everything, I’ve also been making steady progress on that game I’m working on with friends, which we’re calling TopHat for now. We’ve got a very basic website and some social networking accounts in place (mostly empty) as we’ve begun testing an authentication scheme for the game and for user accounts. We’re still working on lower-level code and world generation, but since multiplayer is an integral part of the game it’s important that we get networking and authentication working early.

On the graphics side, about 6 months ago I did a lot of work abstracting rendering and finally wrote code that controls the directional light and lets you set multiple lights. Here’s a video of that functionality:

Shortly after that, I did some benchmarking, as the game was a bit slow on my laptop, and found out we were vertex processor bound with the terrain alone. So I did some research into terrain LoD algorithms and settled on a quadtree-based solution based loosely off the DICE publication “Terrain Rendering in Frostbite using Procedural Shader Splatting”, mostly around slides 37-40. Our implementation uses a zero-balanced quadtree, their T-junction solution, and a static buffer of vertices. We’re trying to target a minimum of OpenGL 2.1, so we chose not to use the method that relied on vertex texture lookup. At some point in the future we may raise the minimum OpenGL version if we feel enough people have support for newer versions of OpenGL. Our current T-junction implementation uses 9 index buffers per quadtree level, using a static 33x33 grid would be a much cleaner solution if we have vertex texture fetch support. Here’s a video of that algorithm in action:

Most of the work I did over break was networking and other backend stuff that doesn’t have much to show off. There wasn’t a whole lot of work on the game throughout the semester, but I’ve recently modified our terrain generation algorithm and started on road generation. Here’s what the terrain looks like so far: 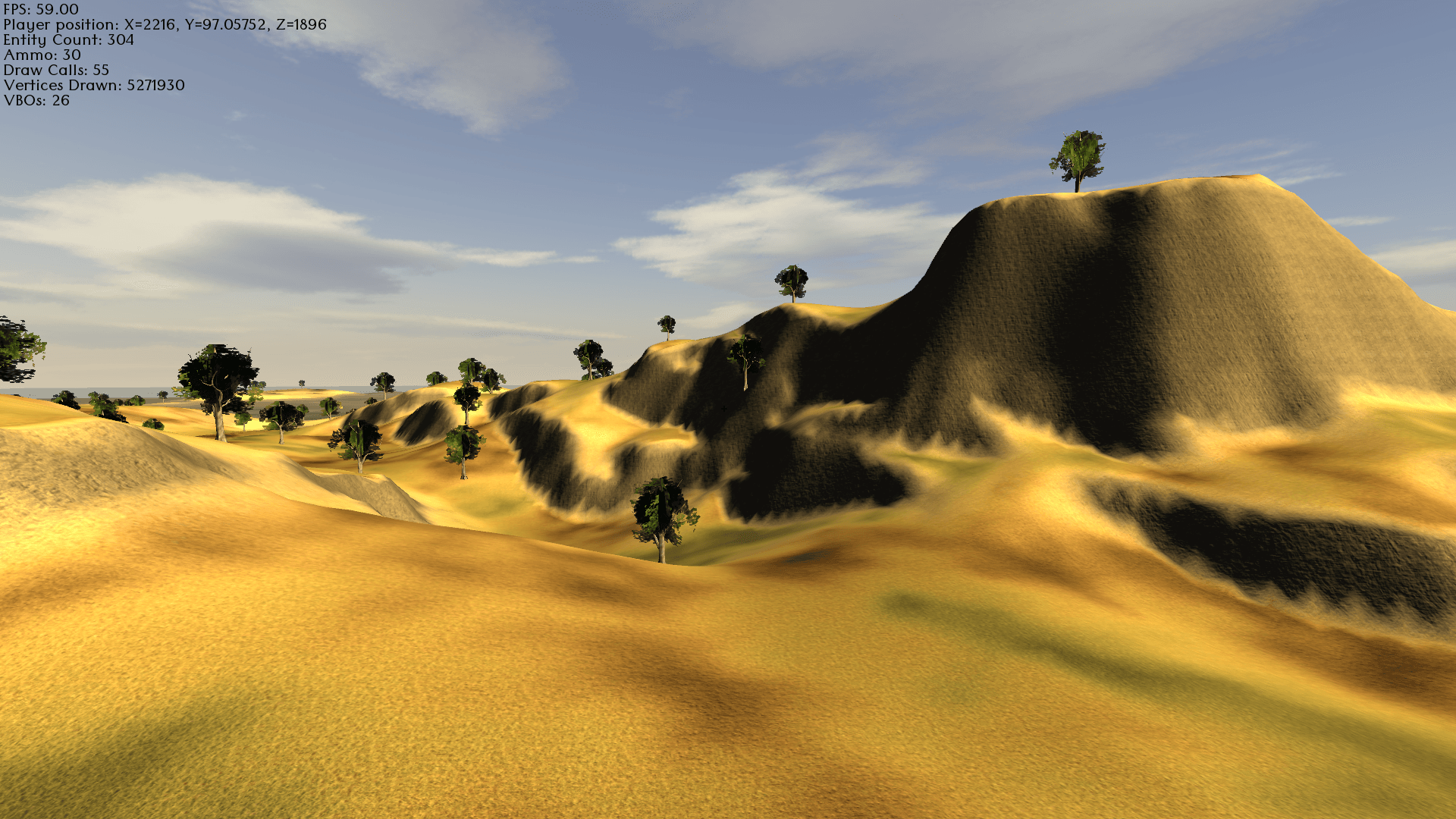 Starting this last semester, I signed up for the Rensselaer Center for Open Source (RCOS), a form of undergraduate research that allows students to work on their own open source software for either course credit or money. I started off making minor contributions to Kinect Gesture Library, but I plan to start my own project next semester. There really isn’t a whole lot to show for my contributions to RCOS at the moment, but I felt like mentioning this anyways.

Over this last semester I’ve made more significant contributions to OpenTK. Not directly, as the original maintainer has gone missing, the last release being in 2010. Instead, I sent my contributions to andykorth’s github repository where people have started making their contributions to. My contributions so far are mostly related to the math classes. I went through and profiled/optimized a large portion of the Matrix4 class, then added several other Matrix classes to match all the available matrices in GLSL (everything from a 2x2 to a 4x4).

Additionally, I wrote a library called SharpFont, a wrapper around FreeType2 for C# and all other CLI languages. I wrote this library because GDI+ was not giving me enough information about each glyph to be able to pack glyphs into a texture atlas and because Tao.FreeType was old and very lacking. SharpFont exposes an API typical to libraries written in C# that neatly wraps everything up in classes. For this reason it’s become my most popular GitHub repo. As of today 14 users have starred it and there are two forks. OpenRA recently replaced Tao.FreeType with SharpFont, and someone created a NuGet package that, as of today, has 168 downloads.

So that’s about it for now, I’ll try and take the time to post more regularly instead of having these massive post twice annually.