So I’ve spent the past few days implementing shadow mapping in TopHat. 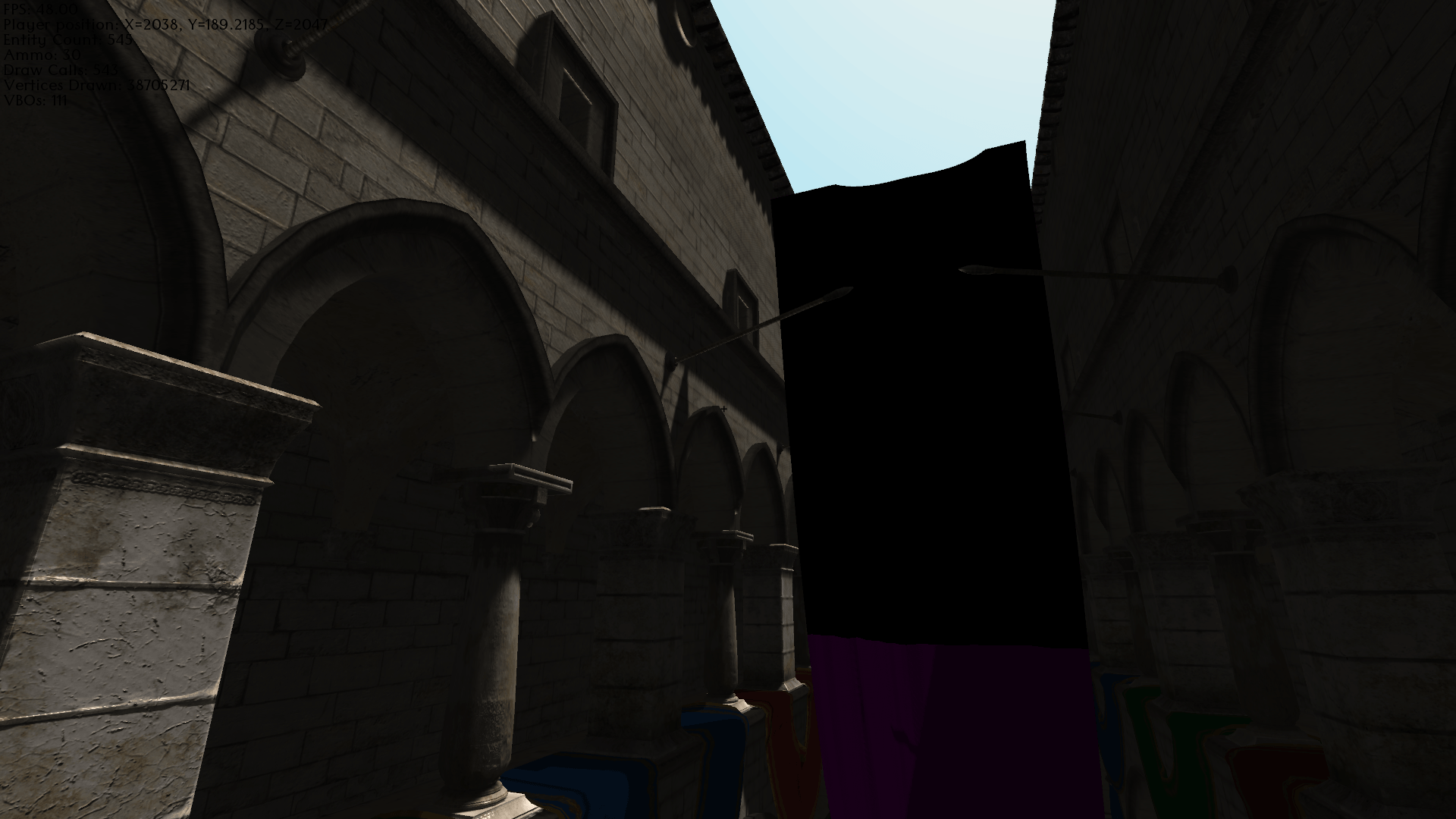 It looks nice, doesn’t it? Well with the settings I had on the screenshot, I was getting about 50fps on my desktop, which has an Intel i7-2600k and a NVIDIA GeForce GTX570. That means that it’s going to be too slow to run on the “average” gaming desktop that we want to target. There’s still a lot of optimization to do, but the simplest solution is to simply use less cascades and smaller shadow maps. In this post I’m going to discuss the process I went through in implementing CSMs, and any issues I ran into along the way.

Since the world is procedurally generated, lightmapping would add a rediculous amount of load time if I wanted it to look even halfway decent. It would also consume a ton of memory, which I’d rather save for more important things. So I needed a dynamic shadow mapping algorithm, and one that would work well on a very large scale (about 16km^2) with a good amount of detail (objects as small as 1m^3 should have shadows). After doing some research, I came across Cascaded Shadow Maps which essentially fits all of my requirements and decided I wanted to implement it.

My primary reference was the cascaded shadow map sample in NVIDIA’s OpenGL SDK 10.6. In addition, I kept a copy of the NVIDIA paper and read through the MSDN article on CSMs.

My game is written in C#, and NVIDIA’s sample was (naturally) written in C++. Normally, porting code between languages isn’t too hard so long as you understand exactly what’s going on in the original version and know how to re-implement it in the target language. The issue with the NVIDIA sample was that it relied on the now-removed OpenGL matrix stacks, and my game manages it’s own matrices separately. So in order to port the sample to C#, I had to keep track of the entire GL_PROJECTION and GL_MODELVIEW stacks in my head throughout the entire draw loop. It didn’t help that matrices were occasionally read out into float arrays and modified them with their own matrix4 class and only sometimes sent back to an OpenGL matrix stack.

Besides that, there weren’t really any issues in porting the code itself. I did end up doing some of the matrix math incorrectly, so the first time I tried running the game with shadows, this was the result: 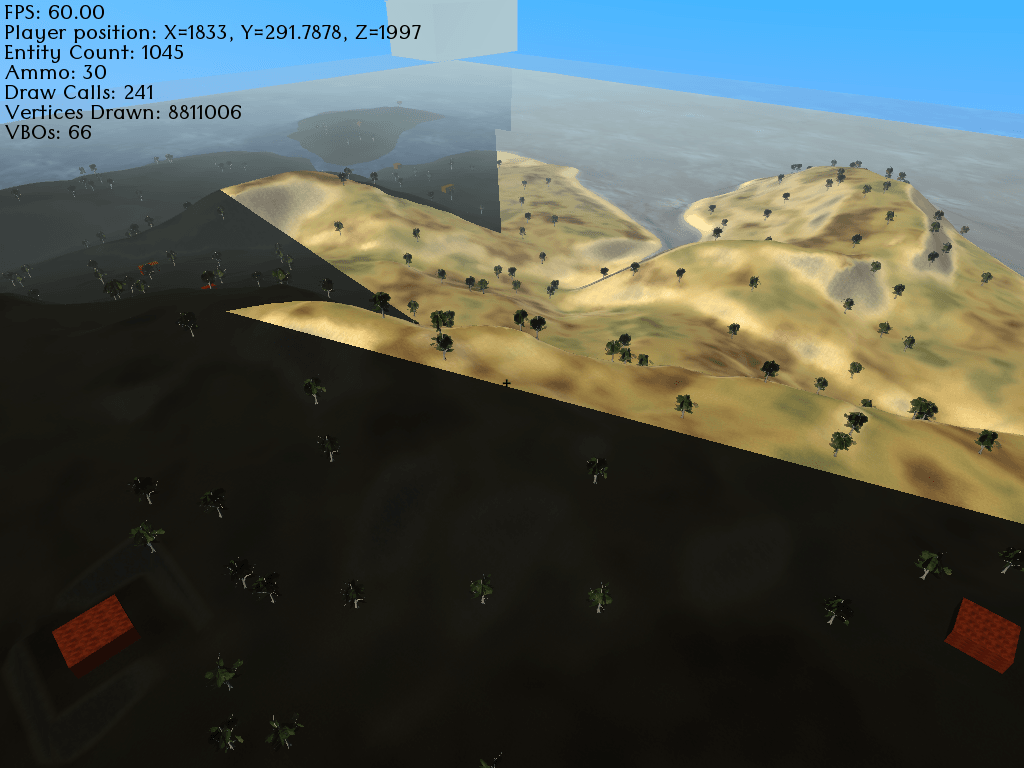 So after a nice break, I came back to the computer and tried to debug the shadows. The first thing I did was shade all the geometry based on which cascade it would read from. As it turns out, that worked just fine. The second thing I did was drawing each shadow cascade on-screen. That’s where I found the first of two bugs, an incorrect light crop/projection matrix.

The way I fixed that was correcting the order of a few of my matrix multiplications and changing the parameters of the look-at matrix. This gave me something resembling a shadow map from the NVIDIA sample, only rotated 90 degrees. For some reason, the NVIDIA sample defines its up axis as the negative X axis, so I went and changed the parameters of my look-at matrix to use the proper up-axis, the Y axis. At that point, I had a shadow map that was looking towards the light instead of from it. I defined my light direction vector as the direction the light is pointing in, and the NVIDIA sample did the opposite of that.

The second bug was an incorrect fragment-to-shadow matrix. After a lot of guessing and trying to follow the sample, I gave up and decided to see if reading the paper would give me any clearer of an understanding of what goes into the matrix. It did. The matrix is simply the inverse view matrix multiplied by the light’s crop/projection matrix multiplied by a “bias” matrix that scales the point into [0; 1] range for easier texture lookup.

The only remaining bug that has an impact on shadow map quality is finding the right Z bounds on the light’s orthographic projection matrix. Either part of the terrain gets clipped out and the shadows from a mountain disappear, or I test against all the bounding spheres in the world and the minimum Z is too far away and I lose precision, causing a Peter Panning artifact. The solution to this is to either place several small bounding spheres at the edges of the terrain and at local extrema, or to do some sort of raycasting test against the terrain.

Also, in testing with lower quality shadow maps and less splits, I’m getting a pretty bad amount of shadow acne, something I’ll look into and tweak some values for.

The first thing I want to change about my shadow maps in the future is the way they’re filtered. Perhaps the option to use PCSS on higher-end machines, maybe replace the 3x3 gaussian blurred PCF filtering with VSM or SAVSM. I have other non-graphics things to tend to for the game right now, but I will eventually write another post about how I fixed the remaining bugs and any additional work I do on shadow mapping.